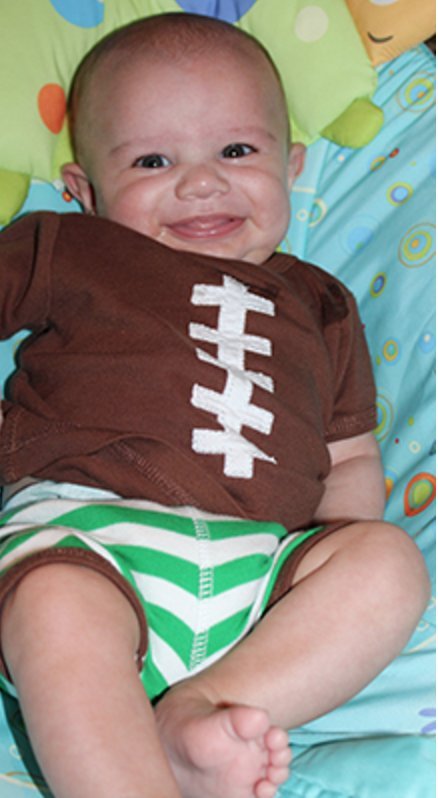 We welcomed a beautiful baby boy, Jaxon, into our lives on May 2nd, 2013 following a normal pregnancy. A few hours after delivery, Jaxon presented with signs of anemia. A blood test revealed a dangerously low hemoglobin level. His doctor immediately initiated a red blood cell transfusion before Jaxon was transferred to a larger hospital with a NICU. Jaxon spent 11 days in the NICU and was released without a precise diagnosis as to why his platelets, red blood cells and white blood cells were at abnormally low levels. Neonatal specialists speculated on a viral etiology. Outpatient lab tests continued throughout the month of May to monitor his complete blood count (CBC), as doctors were waiting for his bone marrow to “kick in”. In early June, a CBC once again revealed abnormally low numbers in all his cell lines and Jaxon was sent to St. Louis Children’s Hospital where we had hoped to acquire a diagnosis. A bone marrow biopsy was performed and the doctors were shocked to learn that Jaxon was most likely suffering from a very rare mitochondrial disease called Pearson Syndrome. After waiting a very long and arduous 6 weeks, the diagnosis of Pearson Syndrome was confirmed through advanced testing completed at Baylor University.

Upon receiving the diagnosis, Jaxon had a central line (Broviac) surgically placed in his chest to make blood draws and transfusions easier. He was enrolled in home health where the nurse would come by twice a week to draw blood and check vitals. Because Jaxon’s bone marrow could not produce enough red blood cells on its own, blood transfusions were needed on average every two weeks. His immune system was suppressed due to low white blood cells and his platelets were always low as well. Unfortunately, Jaxon was placed in Hospice care in August 2013. Jaxon passed away on October 7th, 2013 in the comfort of his home surrounded by his loving family. Fortunately, Jaxon did not suffer greatly in his final few days. We are truly blessed to have had Jaxon in our lives.

Jaxon may have only been with us for five short months, however, he accomplished more in his lifetime than we ever could have imagined. Jaxon, despite his health issues, was a brave and resilient boy who reminded us all of the power of a smile, even on the dark and dreary days. He taught us how to remain faithful, stay strong and always be thankful during times of tremendous challenges. Jaxon’s name means “warrior” – to which he lived up to, every day of his life.