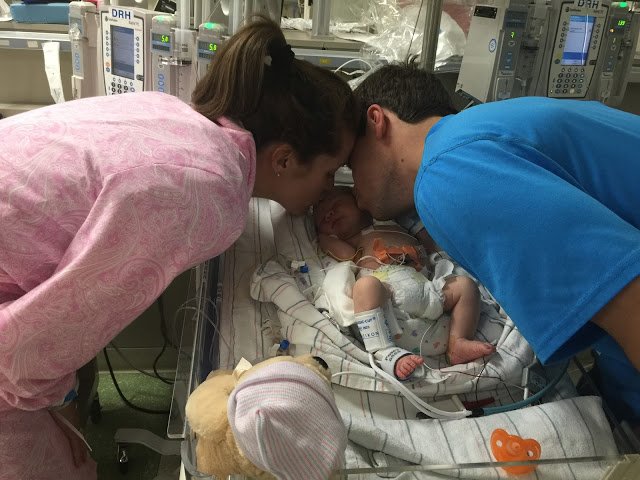 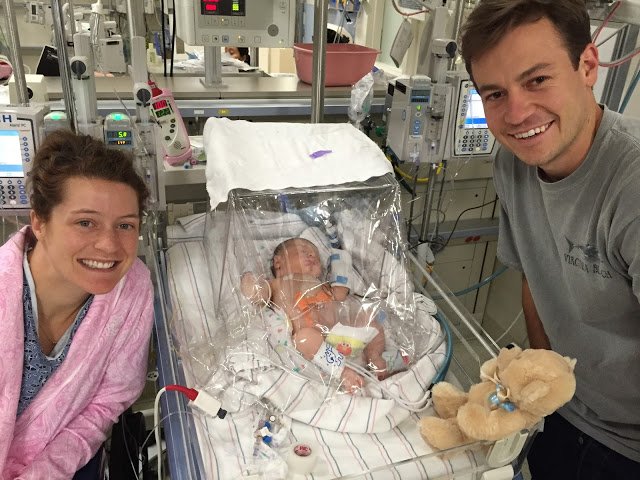 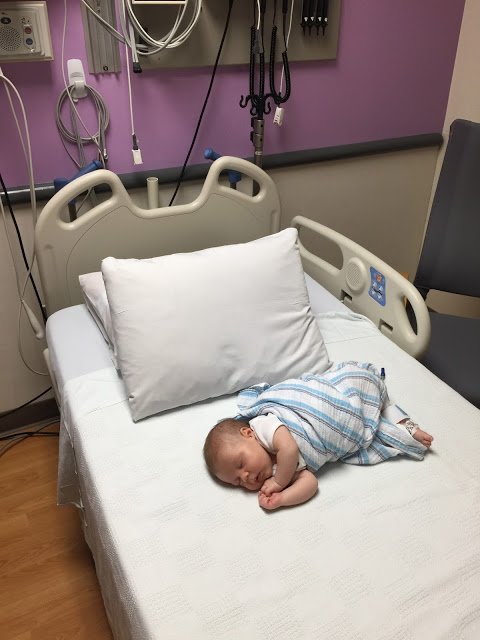 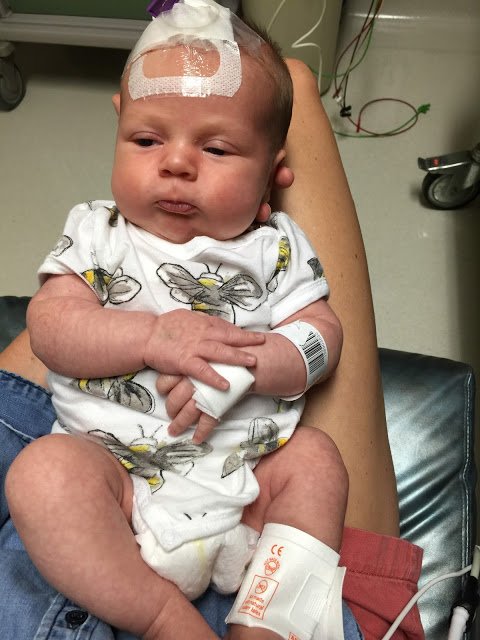 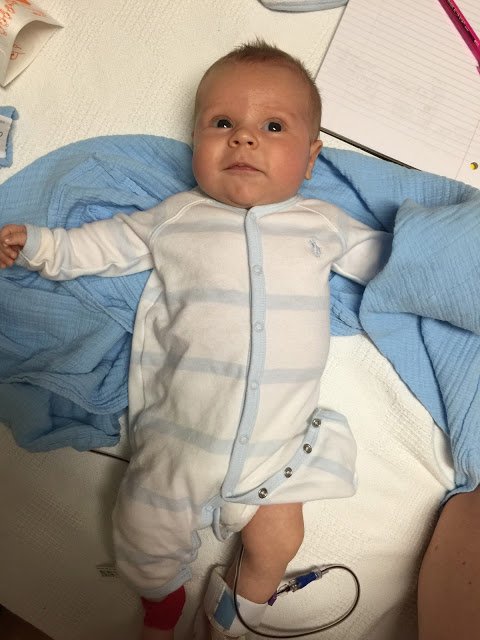 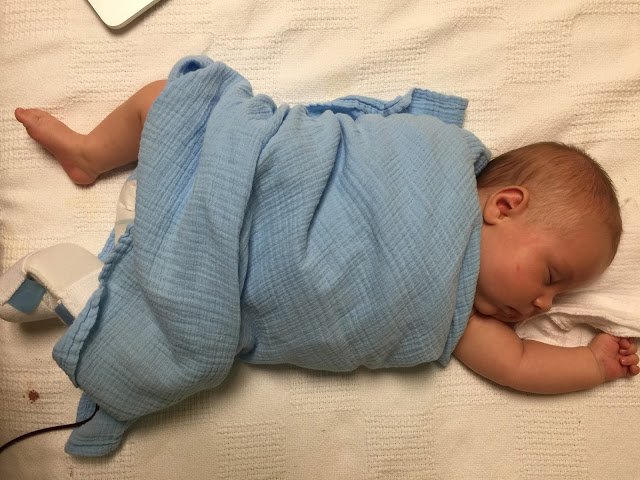 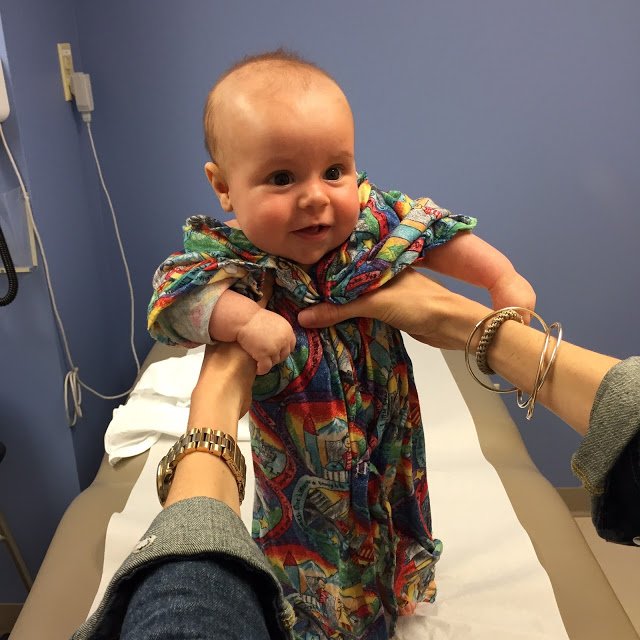 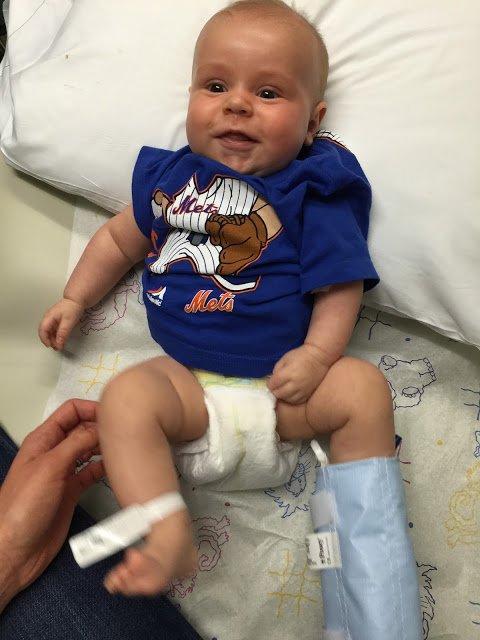 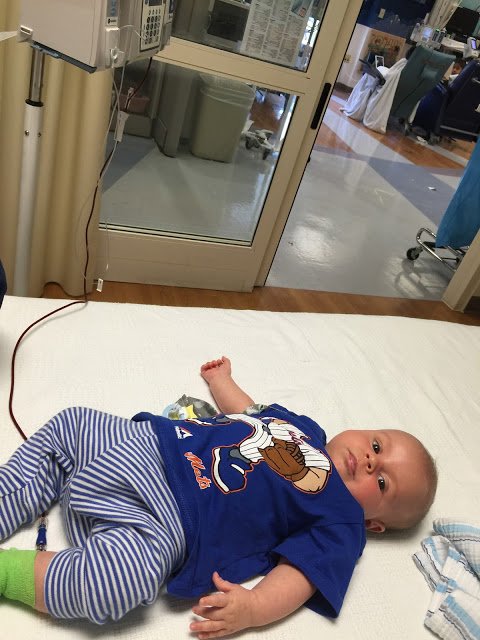 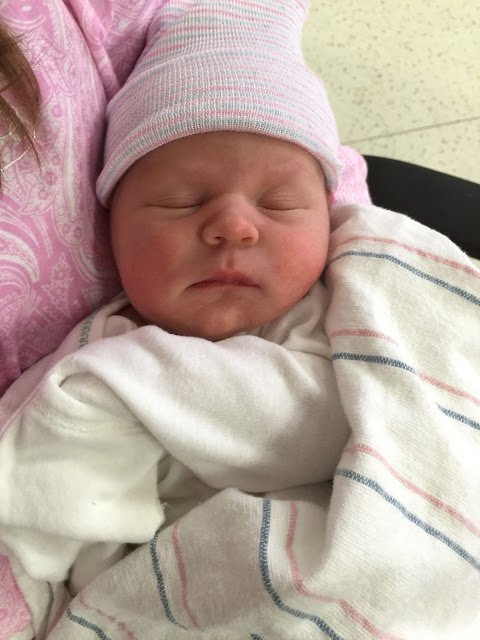 Today is October 15, 2015. Jeff, William and I just returned to North Carolina from Boston after a visit to the Dana Farber Institute. I am using this blog to share the story of William's fight against Pearson Syndrome.

After an uneventful and long pregnancy, I was induced on June 22nd. A few hours into the induction, my doctor told me we were going to proceed with a c-section because the baby's heartbeat wasn't tolerating labor. William was born at 1:59 am at 7 pounds 11 ounces. Following delivery, the on-call pediatrician recognized that William had retractions (labored breathing) and was unusually pale. I got a kiss, but William was quickly taken out of the room, followed closely by Jeff. During their initial observation, the doctors realized William's oxygen saturation was too low and a complete blood count showed that he was incredibly anemic. The rest of the week in the NICU was a blur of transfusions, blood tests, doctor visits and IVs. Multiple doctors told us they had never seen a baby born so anemic without an obvious underlying cause. They postulated infections, viruses, unknown blood loss during the operation, etc for his condition. We left the hospital a week later, with no clear answers and a follow up appointment at Duke's Hematology-Oncology Department. During that week, William was the toughest little baby and we started calling him Champ.

We met our doctor, Jennifer Rothman, Pediatric Hematologist at Duke Children's Hospital. At this appointment, William's blood count was checked. We learned that his red blood count had decreased since leaving the NICU. We further learned that in addition to being anemic, he was also neutropenic (low white blood cells). We still had no idea of the underlying cause.

Dr. Rothman determined that William's red blood count was too low and scheduled another transfusion. This was William's first transfusion out of the NICU. Watching him get an IV was terrible because his veins were so small and hard to find. Since we were in the Oncology-Hematology department, we were in the same area as children receiving chemotherapy. During the transfusion, we also learned that his low neutrophils was very concerning to Rothman. She scheduled a bone marrow biopsy/aspiration for the following week, hoping to rule out leukemia.

William had his bone marrow aspiration. This was such a hard day for us! We had to watch him get an IV in his head because the nurses could not find a vein in his arm or ankle. We also watched him receive his anesthesia. While the procedure only took about 30 minutes, it was miserable waiting in the waiting room. It was the first time since he was born that one of us wasn't with him!

The bone marrow aspiration came back with no leukemia cells. It was the happiest I have ever felt! However, the aspiration did have some unusual findings. He had something around his red blood cells called ringed sideroblasts. We, and the doctors, were not sure what this meant. Dr. Rothman started sending out many genetic tests.

William had another transfusion. One of his genetic tests came back with a variant and we thought this meant he had something called X-Linked Sideroblastic Anemia. We were thrilled, because this type of anemia is sometimes fixed with Vitamin B6.

Through Dr. Rothman, we were put in touch with a doctor at Boston Children's who researches sideroblastic anemias. He cautioned us to not think William has X-Linked Anemia and encouraged us to participate in his research study to hopefully rule out other potential options. Given William's lab results, he felt that William might have a more serious condition.

This was the day we learned that William had Pearson Syndrome. The results had come back from Boston and were confirmed by Rothman. William has a deletion in his mitochondrial DNA and there is currently no cure. The only treatment is supportive, meaning that they address organ systems as they fail. There are only around 100 reported cases of Pearson Syndrome in the medical literature, since its discovery in 1979. This was absolutely the worst case scenario and one that we previously refused to believe was an option because William seemed so healthy and normal.

William received his seventh transfusion. We began the process of setting up a team of doctors that William will likely need in the future. These include a cardiologist, endocrinologist, audiologist, optometrist, nephrologist, geneticist, neurologist, and gastroenterologist. The exact course Pearson Syndrome will take in William's body is unknowable but it is likely that his heart, brain, kidneys, pancreas will be compromised, along with the hematological issues he's already facing.

Jeff, William and I traveled to Boston for a clinical visit at the Dana Farber Institute. It was encouraging to meet with a doctor who has seen Pearson Syndrome patients before. He also put us in touch with doctors at the Cleveland Clinic. After the visit in Boston, we strongly feel that a cure is possible if the resources are available to the smartest doctors. Jeff and I are now focusing on setting up a foundation with the explicit purpose of funding research that leads to more effective treatment and a cure for Pearson Syndrome.

Besides the medical appointments, recurring transfusions, and overwhelming amount of Purell in our home, we have loved being new parents. It is easily the best part of our amazing lives! Often, it is easy to forget William has such a devastating medical issue because he acts and looks like a perfect, normal baby! He has travelled to Colorado, Nantucket, and Washington D.C. He has received many visits from his aunts, grandparents, and cousins. He hits normal developmental milestones, laughs, coos, and smiles. He sleeps through the night, gives kisses and hugs and loves bath time! He is an absolute champ!